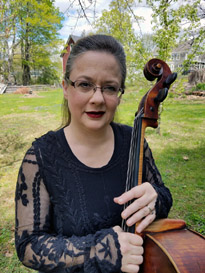 Dorothy Braker (cello) – BM and MM (The Juilliard School) had her very first lesson in music at the age of 4 with Dr. Shinichi Suzuki, whose new idea about musical study through unlocking each child’s innate potential was first being brought to the US. Her studies in cello were with Lois Yopp, Phil Blum, Karl Fruh, and Harvey Shapiro. Braker has performed as principal cellist with the Portsmouth Symphony, the Great Bay Symphony, the Connecticut River Valley Orchestra, and the NH Philharmonic. A prolific performer, coach, and teacher, Braker also has done a great deal of youth outreach, and has spent a decade creating unique chamber music performances throughout the Seacoast area in Mass., Maine, and NH as the founder and Artistic Director of Aliento Chamber Players.