Since 2002, Hermanos Cocina Mexicana has generously served audience members a delicious buffet, included in the price of admission. Thanks, Hermanos!

Jazz in January is sponsored by M. Elaine Tefft in memory of Stanton E. Tefft and Wendy A. Tefft. 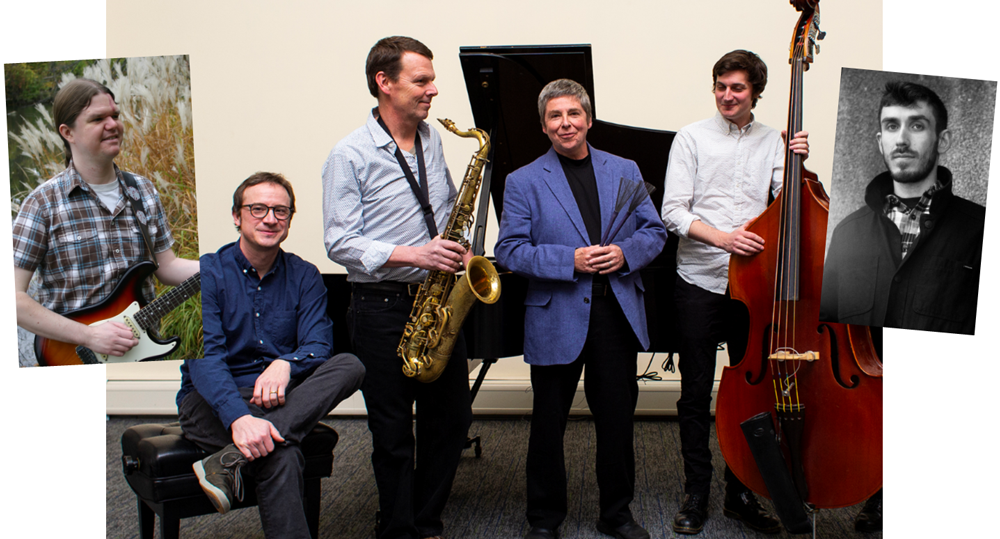 Zeb Cruikshank performs and teaches in musical genres ranging from blues and classic rock to acoustic fingerstyle, jazz, and classical guitar. Most recently he was a full-time guitar faculty member at MacPhail Center for Music in Minneapolis. He holds a Bachelor’s in Guitar Performance from McNally Smith College of Music, with further studies in their advanced Artist Diploma program. Zeb has recorded 5 albums, and opened for national acts such as Maceo Parker, Living Colour, Semisonic, Firehouse, and Chris Duarte. In Minneapolis he was known for his original jazz fusion project The Zeb Cruikshank Band, his acoustic duo Jess & Zeb, and classic rock band The Brute Squad.

Tim Gilmore received a Bachelor of Science in Elementary Ed/Music from Salem State College and studied further in composition and performance programs at Berklee College of Music. He is a member of the Harry Skoler Jazz Quartet with Brownstone Recording Artists and has performed with such groups as the Cape Ann Symphony, the Symphony by the Sea, the Paul Madore Chorale, the Boston Percussion Ensemble and the Cambridge Harmonic Orchestra. He has also performed with Lester Bowie, Marion McPartland, Tower of Power, Tiger Okoshi, and Warren Vache. Some of his recordings include A Work of Heart, Reflections on the Art of Swing, and Conversations in the Language of Jazz on Brownstone Records.

Scott Kiefner graduated from McGill University's Schulich School of Music in Montreal, QC, where he studied with Fraser Hollins and Chris McCann. In the summer of 2013, he was selected to attend the School for Improvisational Music Intensive workshop in New York City. He has since returned to New England, where he performs as an in-demand bass player with Jonathan Lorentz, Jim Dozet, Chris Klaxton, and many others. He began his musical life in Music & Movement at the Music School, continuing on to study piano until he discovered the bass. He studied bass with Don Williams at the Music School and was a member of the Scholarship Jazz Ensemble.

Eric Klaxton performs frequently with many notable ensembles, including The Soggy Po Boys, Sojoy, OurBigBand, and composes and arranges for a number of his own groups. He earned his BA in Saxophone Performance at the University of New Hampshire where he studied jazz harmony with Mark Shilanksy, arranging with Mike Annicchiarico, and worked with such inspiring visiting artists as Clark Terry, Frank Wess, Terell Stafford, Jimmy Heath, and Stjepko Gut. Eric enjoys the arts across a broad spectrum, seeking inspiration from the works of great philosophers, classical composers, modern authors, directors, and visual artists. He teaches jazz piano, composition, and audio engineering at Concord Community Music School.

Matt Langley had a great band director at Rundlett Junior High School in Concord, NH that opened the doors to the paradoxical joy of improvisation at an early age. Thus began a largely self-guided musical journey that has also included a brief period of lessons with saxophonist Stan Strickland, an Aebersold Jazz Camp encounter with "Blue Lou" Marini and David Baker and a visit to UNH's Summer Youth Music School. Since beginning his professional career directly out of high school, Matt's love of music has taken him from blues bars in Waterville, Maine to the famous Green Mill in Chicago, Illinois. From the Boston Globe Jazz Festival to Sunday Services at the Second Congregational Church in Kittery, Maine. Matt has recorded extensively with the Charlie Kolhlhase Quintet, with his own group Color, with pianist Pandelis Karayorgis' System of 5, with Pianist Ted Brancato whose CD The Next Step features Matt extensively on Soprano and Tenor Saxophone. Ted and Matt toured the Pacific Northwest in the Fall of 2013 performing music from the CD in concert halls, colleges and night clubs with some of the finest jazz musicians from the Seattle area. Recent recordings include Mother Superior and the Sliding Royales’ self-titled soul CD and, in August of 2016, Mike Effenberger’s Weird Turn Pro for winter or spring 2017 release. Matt has collaborated with visual jazz artist Roger Goldenberg on the audio visual feast, in Ears 'n Eyes since 2011, producing multiple live shows often involving large ensembles and compositions created specifically for each event. Currently Matt performs with numerous groups in the New England area as well as teaching saxophone, improvisation and coaching ensembles at Concord Community Music School, the Portsmouth NH Music and Arts Center, the Shaker Road School in Concord, NH and at his home studio in Eliot, Maine. Matt has shared the stage or recording studio with Ron Carter, Richie Cole, Fred Hersch, John Tchicai, John Medeski, Billy Martin, Chris Wood, Dave Fuzinski, Matt Wilson, Charlie Kohlhase, Tiger Okoshi, Roswell Rudd, Gene MacDaniels, Dave Douglas and many others.

Tom Robinson received his B.M. in Jazz Studies from Capital University in Columbus, Ohio. He studied saxophone with Michael Cox and piano with Mark Flugge and Joe Hunter. He performs throughout New England with several groups. He has been a featured artist at the Catamount Arts Center and Mountaintop Music Center. He recorded a collaborative CD with Tim Gilmore and John Hunter in 2006 called Skylight. Tom teaches at the Concord Community Music School and St. Paul's School as well as at his home studio. Tom is currently involved in several projects including Donkilo and Bangkok Disco.